I woke at 7:45 and hurried down stairs to make sure I didn’t forget anything out of my pack. I jumped on the scale to see how much I was carrying: 26 pounds with a liter of water and 4 days of food. 2 pounds passed my weight to pack weight ratio. Cecil called me in for breakfast and we had a cheese omelette and granola. We hopped in the car about 8 o’clock and began the hour and 15 minute drive back to White Top Mountain. It looked like it was going to be a beautiful sunny day.

White Top is famous for a folk festival where in 1933 Elenor Roosevelt showed up. It’s also we’ll known for a wild onion called ramps. There’s a ramp festival every year that I hope to go to when I’m back in the area for trail days. 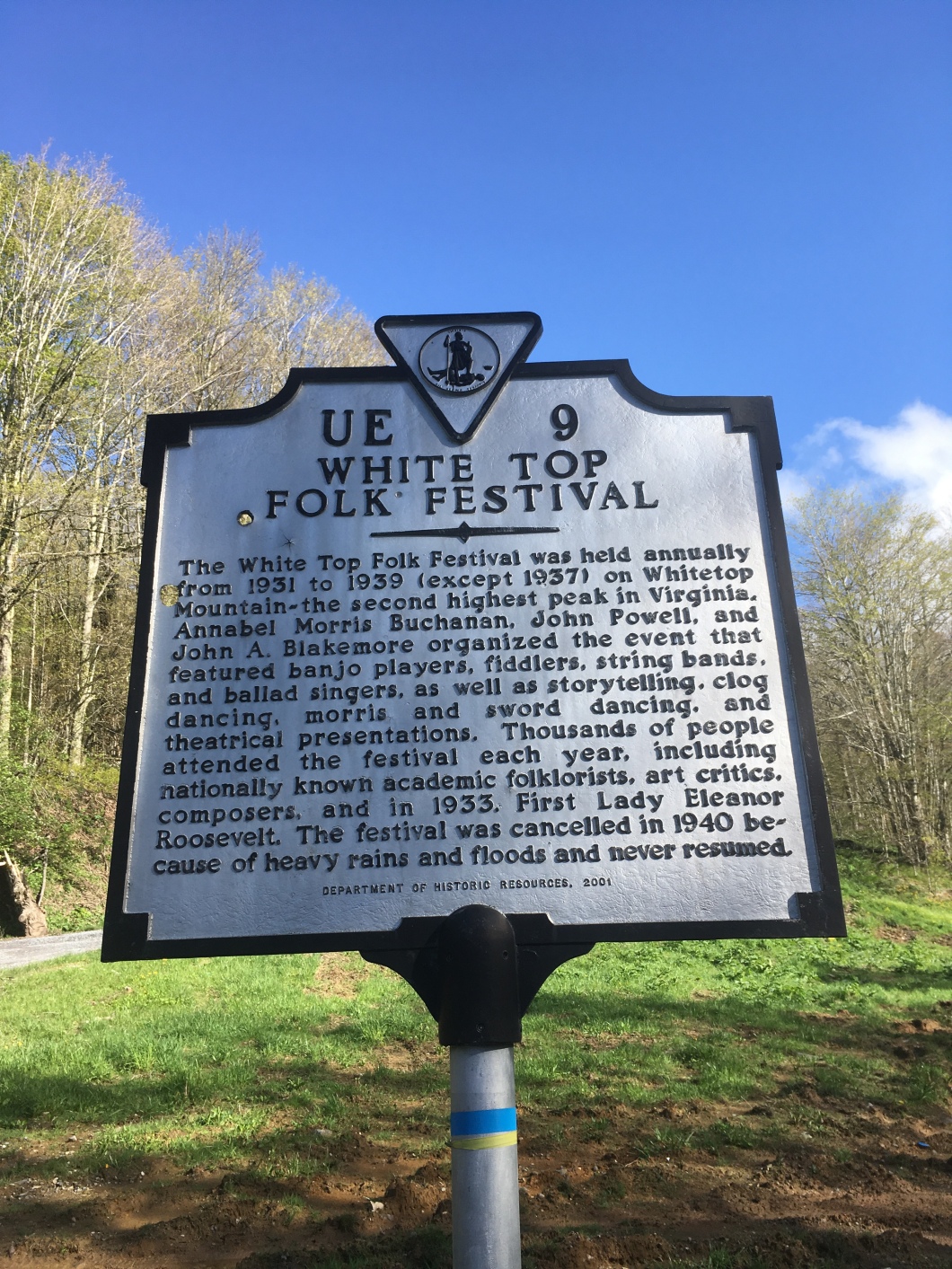 We reached the top via forest service road about 9:30, took a few pictures and then I was off. Cecil and Julie already had a plan that day to hike up White Top with some friends and so I would see them again as I hiked down. I passed a few tenters a little ways down the trail that were just waking up.

I climbed down about 2 miles with the smells of rhododendrons and pine trees. I was thrilled to see I had made it here in time to see the little fiddle heads coming up before they popped into fern bushes. I carefully scanned the trail for snakes. Roots look a lot like snakes to me. I passed Cecil and Julie plus two of their friends about an hour later. We had a short chat and then I was off on my own. I stopped at the bottom of the mountain for a snack about 11. 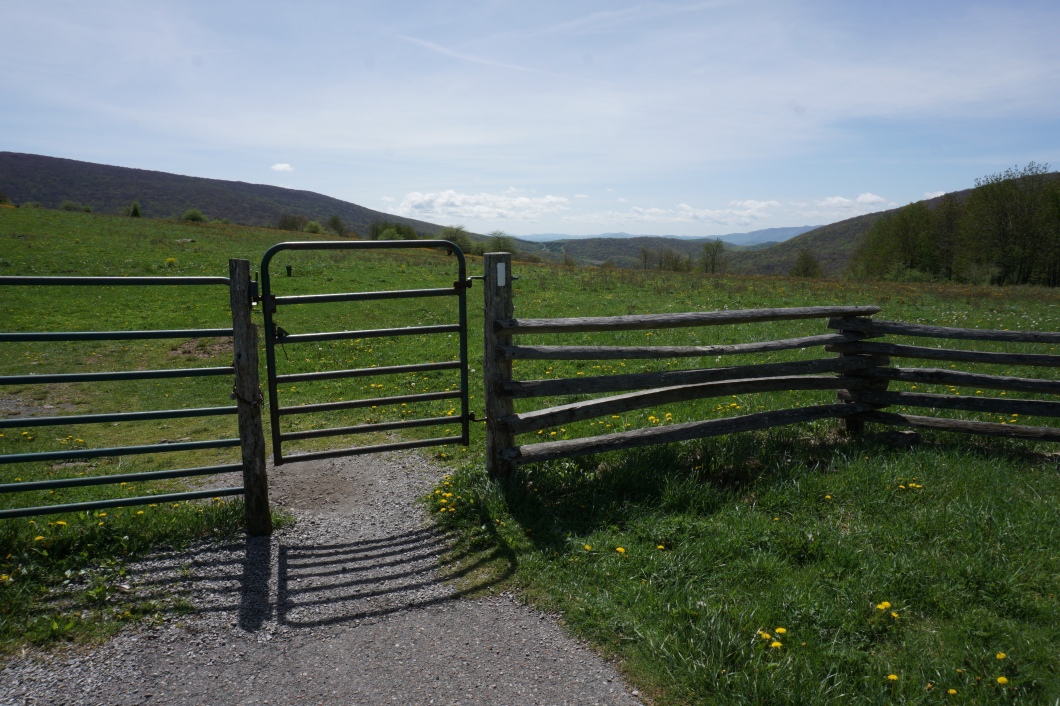 The next section was a gradual path up through meadows with vast mountain vistas and wildflowers. Also, wild ponies. I entered into Grayson Highlands about 1 and stopped for lunch 30 minutes later. I found a rock in a pasture with a few distant ponies. A few minutes later I noticed the herd slowly making its way toward me. One pony finally chomped its grass right beside me and then raised its head to stare me down for my food. I shooed it away but it kept coming back. A few thru hikers showed up to take pictures. I met one that was friendly named 2 Sticks (obviously because he was using 2 wooden sticks for hiking poles). I quickly finished my lunch and continued on.

Up and around Mt Rogers and through more pastures. Lots of rocks too. I passed the 500 mile mark for those hikers that started in Georgia. I was on 12. My feet were talking to me by that point. Also my shoulders. My pack is too heavy. I saw a few friends had messaged me well wishes for my journey. I was glad for the connection as I was starting to feel a bit lonesome. I passed the first shelter of the day at the 6 mile mark. It was about 2 and I was hoping to make it to the next shelter 6 miles later. I kept trucking. 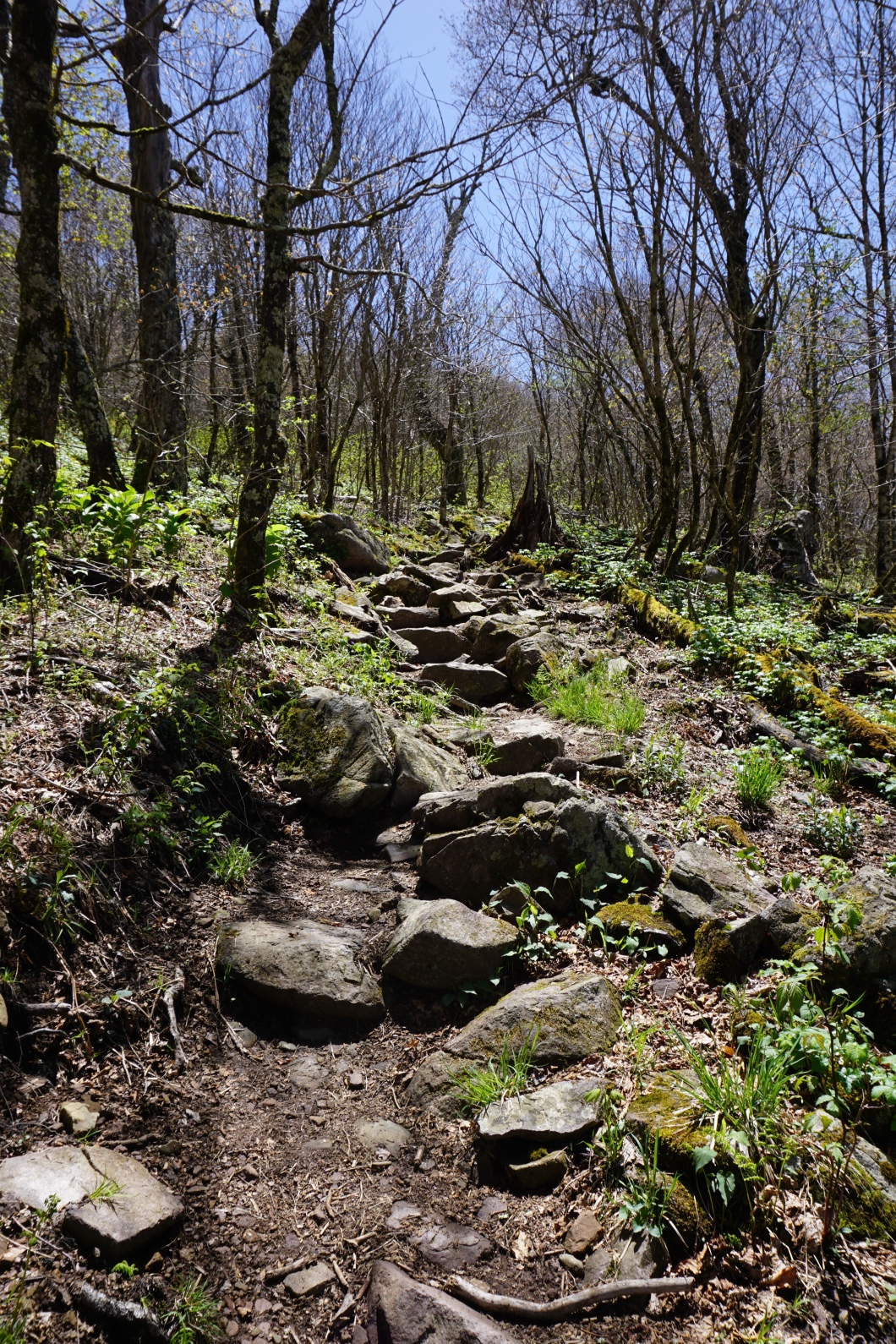 The next 6 miles were exposed and the sun burned my neck and knees. I came upon a little rock scramble and was happy for a change in terrain. I stopped a moment to look out on the ridge lines in the distance. I could see Grandfather Mountain and the “sugar cube” which is a nick name for a ski resort hotel that was built directly across from Grandfather Mountain. After it was built, North Carolina passed a ridge protection law that prevents future architecture on mountain tops. This includes wind turbines.

As I walked through Grayson I remembered the singer/songwriter/banjo player Ola Bell Reed from Lansing, NC. She came up to these parts to write her song “High On A Mountain” which has become a bluegrass standard. I sang what I knew of it as I hiked on.

Among the rocks I came across a cave looking thing and thought I don’t think I want to go through there but it turned out that was exactly where the trail was going. I did a quick look around to see if I could see any critters and stepped lightly through. 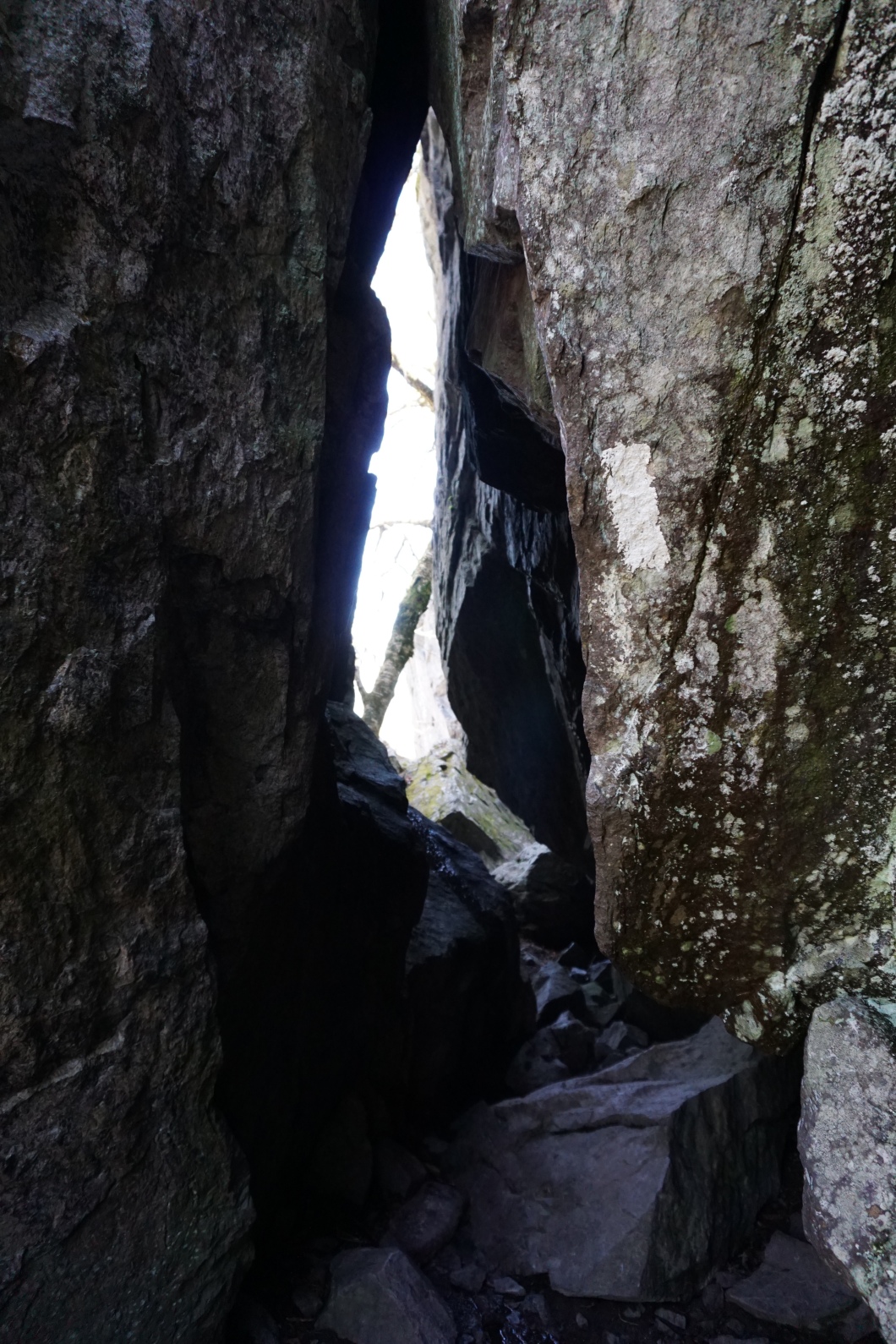 I was about 1.5 miles from the shelter at 4:15 and saw I had service. I made a quick call to my partner Lucy but quickly lost service. I crossed a few creeks, passed through a cattle gate and a guy with a crooked grin smoking a joint before I reached the shelter. It was 5:30 I was greeted by 2 other guys. One said the best water source was .1 up the trail but it was a little yellow. I thought, I have a filter, no problem. I set up my tent near the shelter and started making dinner. It was a beautiful mild evening as I boiled my water and made chili Mac. I had better service at the shelter and so I called Lucy back. We talked as I ate. 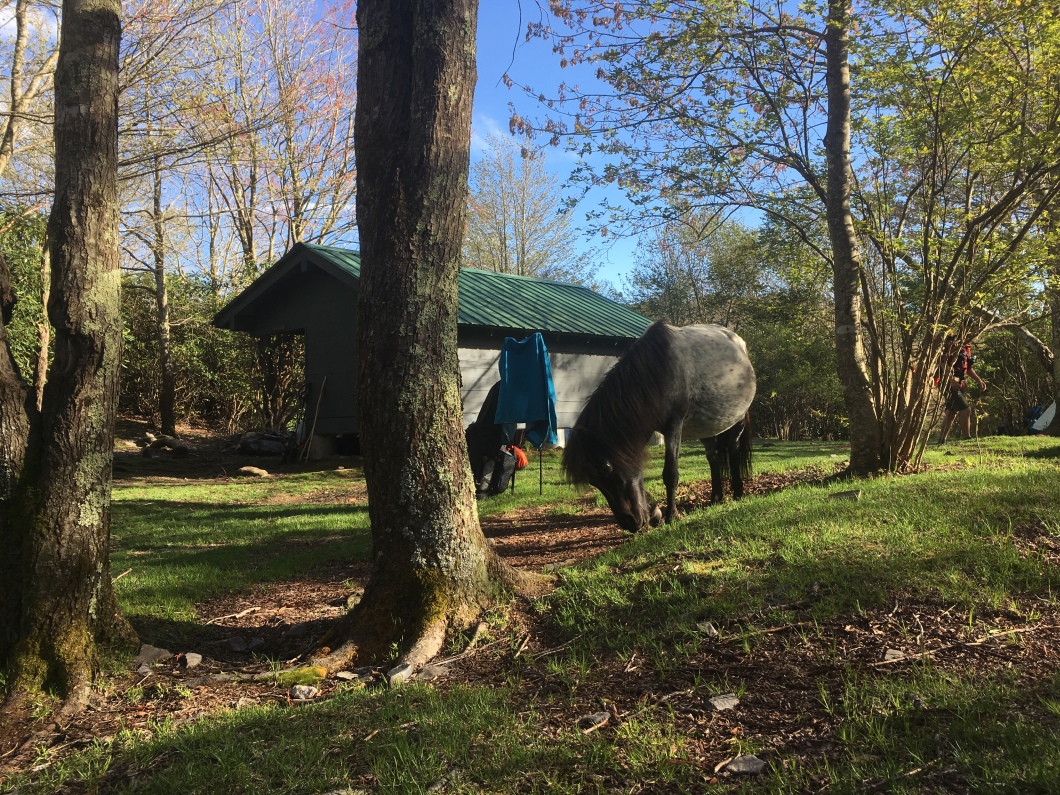 I was feeling a little anti social so I continued my camp chores by myself and carried my food to the bear locker, brushed my teeth, and zipped myself into my tent. I called my Dad and he gave me a weather update. It’s supposed to start raining on Wednesday.

I wrapped myself up for the first time in the quilt that had just arrived 2 days ago. I put on my down jacket and down socks. It was cozy. I listened to Pharis and Jason Romero for a little while as the sun went down. The camp site was quiet as a mouse by 9 (hiker midnight). About 6 tents and 4 people in the shelter. Not bad for a for a second day.