I slept like a rock. A bed had never felt so comfortable. I opened my eyes about 7 and felt disoriented in a hotel room. Patches was awake and checking her phone. We were slow to rise and gather our things into our packs. The thought of just staying another day crossed my mind. We made down to the lobby about 7:45 and scavenged the menial continental breakfast of instant oatmeal and muffins. A few other hikers were already headed to the 8 o’clock shuttle back to the trail. We resigned the fact that we would have to catch the next one, whenever that was, to finish our breakfast.

Shock Top walks in with a grim look and nods at me. She said she wasn’t feeling well and might have to stay another day. Meanwhile, Patches was on the phone with the shuttle dispatcher and there was one leaving from Walmart (.5 mile walk) at 8:30. She said we could make it and asked that the driver wait for us. Patches told me to go ahead since she needed to make another phone call. I swung my pack into place and began to speed across the parking lot to the other side of the street toward Walmart. Past the traffic light I saw a shuttle bus driving toward the hotel. I gave a wave and watched it carefully as it slowed to pick up Patches. I whipped around and started running. Surely Patches had told them to wait. She did and I realized I was going to make it. 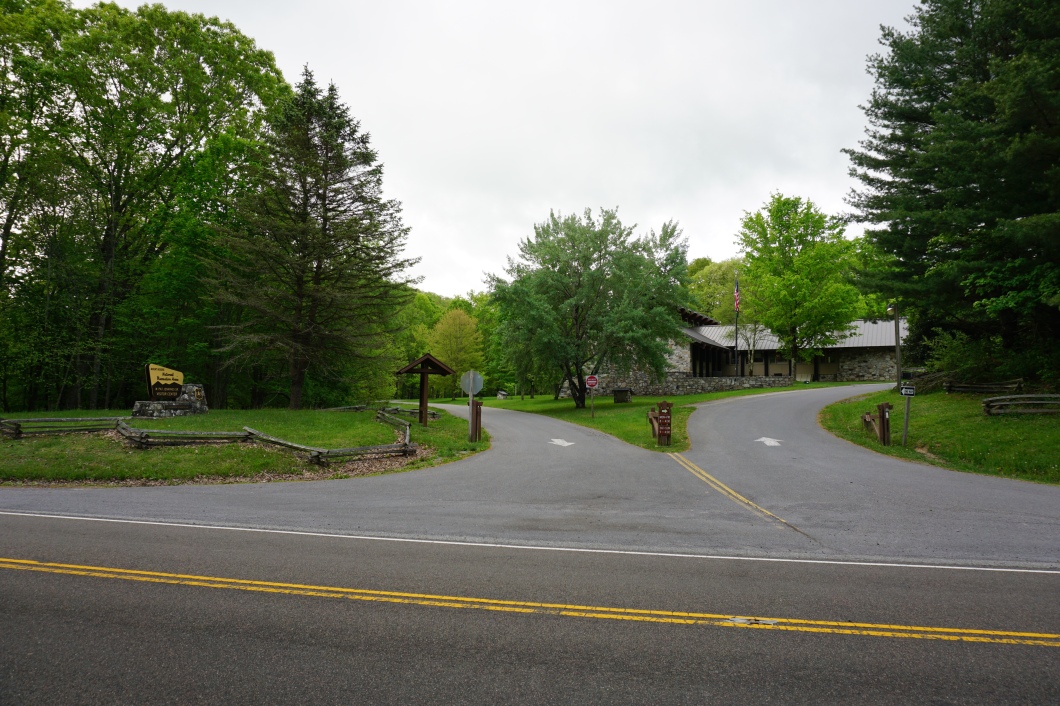 It was a short ride back to the Mt Rogers Visitors Center and Patches and I departed at about 9. I went in the visitors center to buy some post cards and look around. I was taking my time today.

I used the bathroom and filled up on water. A thru hiker with a shaved head and bright smile left some zip locks on a bench for others and we said hello. She was headed to Atkins to pick up another food bag since hers had been shredded by a bear 2 nights ago. She passed me on the uphill from the road crossing. 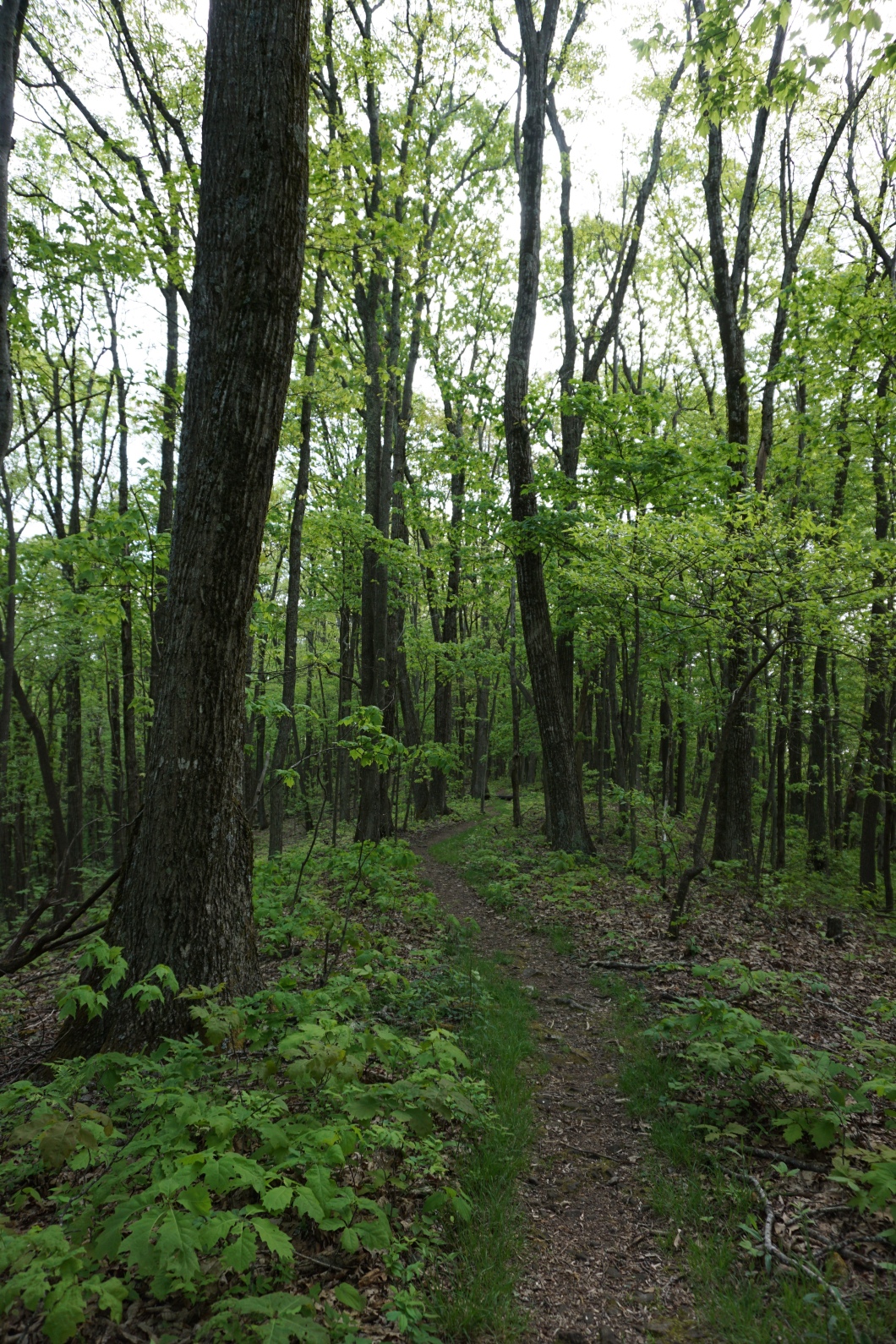 About a mile later I came upon Patches sitting on the side of the trail crying. The first day out of town always makes me home sick, she said. I offered some words of comfort as she got up to go. I hiked on up the rocky ridge to yet another mountain without a view. I was feeling good and listened to Ola Belle Reed as I climbed down the other side. 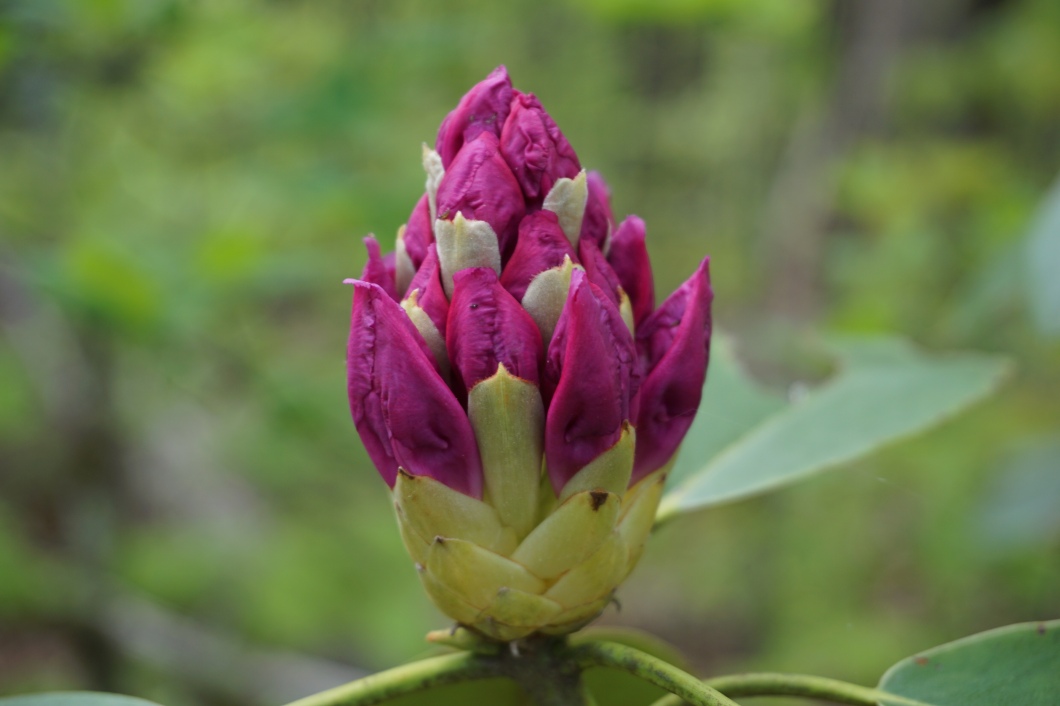 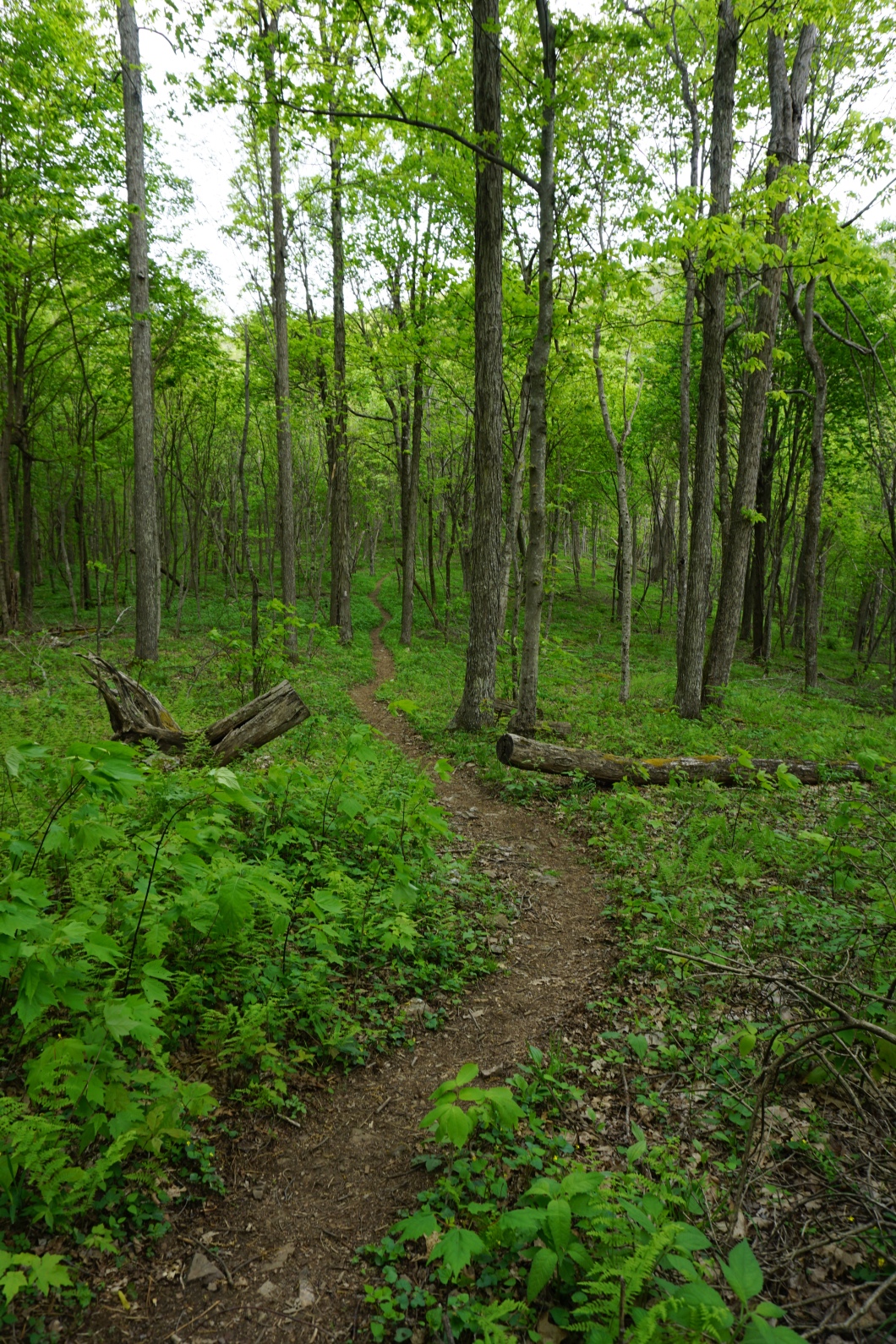 At the bottom I sat down for lunch with a older thru hiker that I’ll call Bob for his privacy. He was from Morehead City, NC. I told him I had just finished a job with a documentary company in New Hampshire and he mentioned he saw on TV last night that Ken Burns was doing one on Country Music. I said I worked on that and he said, Well, I’ll have to get your autograph. He headed on as I finished my lunch of a Bojangles biscuit and almond butter. As I was about to get up I saw Patches coming down the mountain. I lingered a while longer to chat and then was on my way.

Continuing up another hill of rocks I ended up in a field of blooming Mayapples. At noon I reached a view of the valley where I could see I-81 in the valley between the mountain ranges I am bound to travel over. 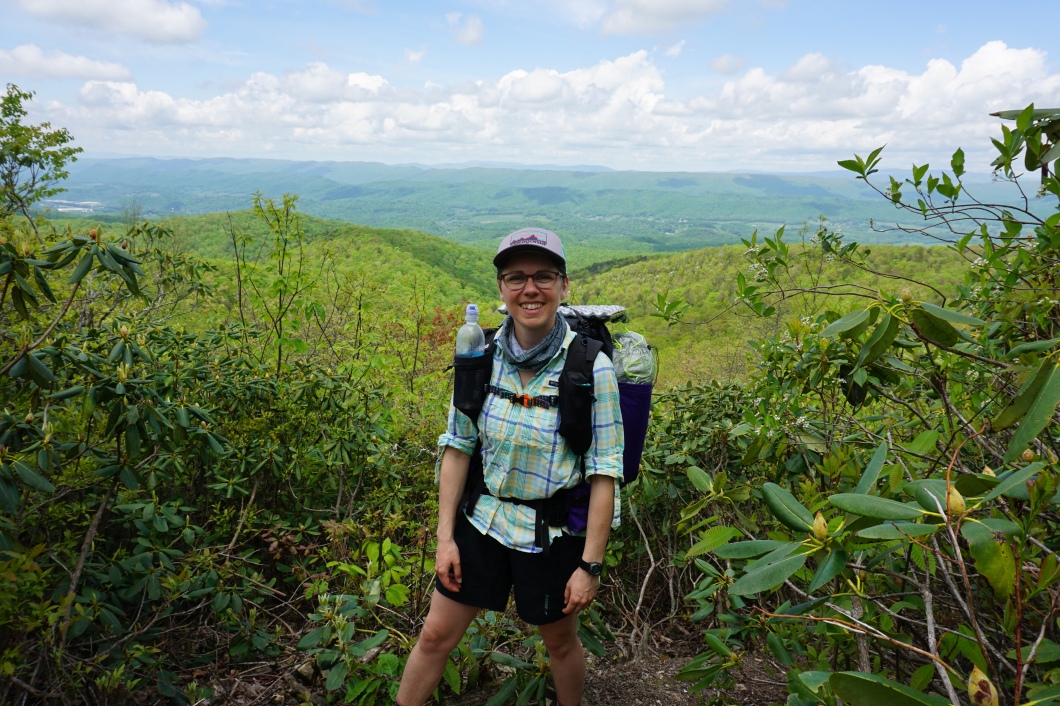 Soon after the view I reached the shelter I had thought about stopping at for the night. There were no good tenting sites. Bob was there finishing his snack and we talked about where we would spend the night. He was trying to make it to a campsite 10 more miles up the trail. That was too much for me. I had read it was supposed to rain tonight and then saw on my map a building called the Lindamood School House at the Settlers Museum south of Atkins. It was only 1.8 miles more. As I was getting up to go Patches showed up and talked about our destinations. She was headed to the alpaca farm hostel (which has tenting places). I said I’ll probably check out the school house to see if it would be a good place to get out of the rain and because it was free. 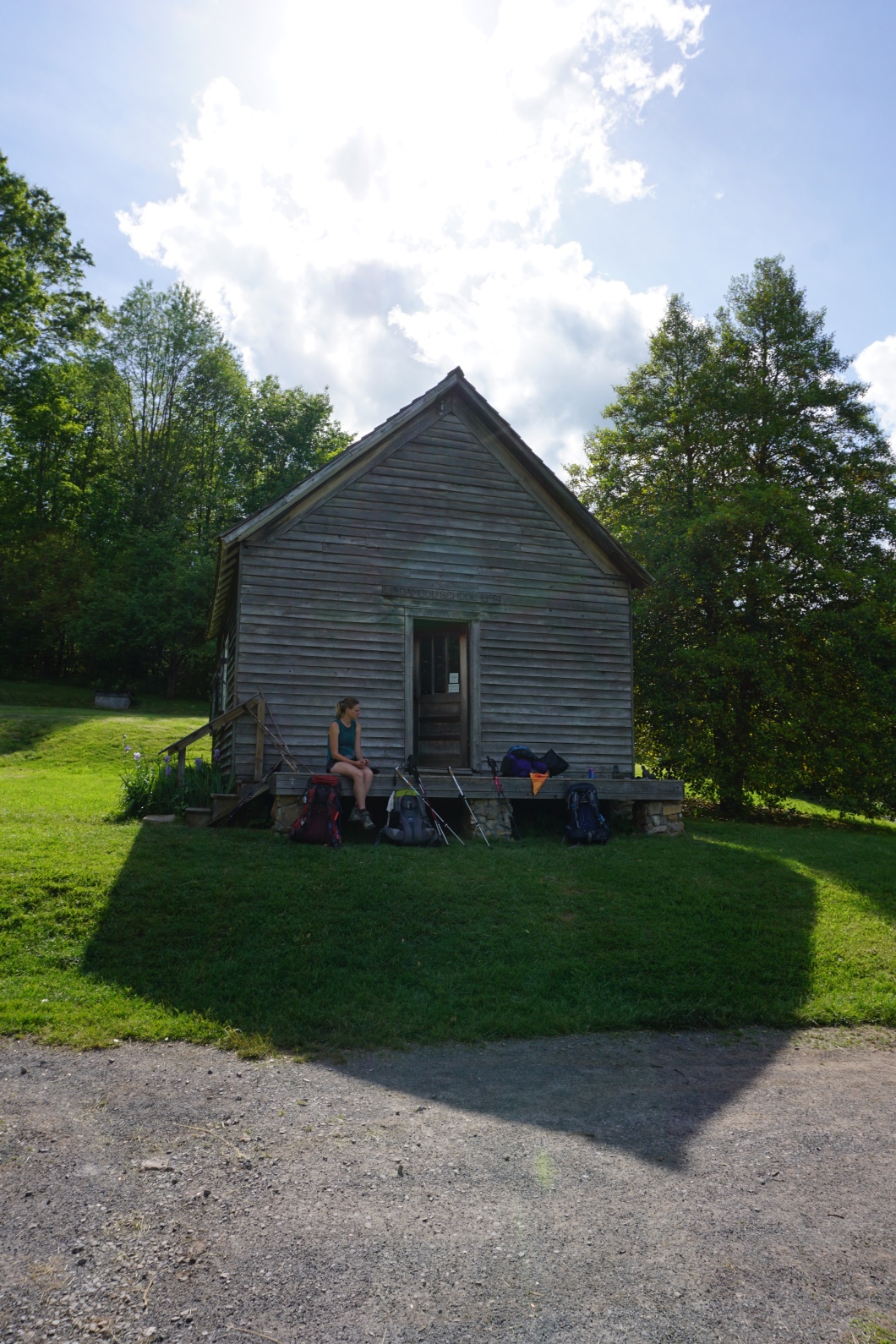 We marveled at the “trail magic” in the school: cooler full of cold water and sodas, fresh fruit, snack bars, and toiletries. It was a beautiful and mild evening but I was certain it was going to rain overnight. Disco declared he was staying at the school house to avoid the rain and so I felt comfortable joining him. As Patches was getting ready to go the 3 more miles to the hostel, I contemplated going too but I had done 8.7 already and knew I shouldn’t push it. 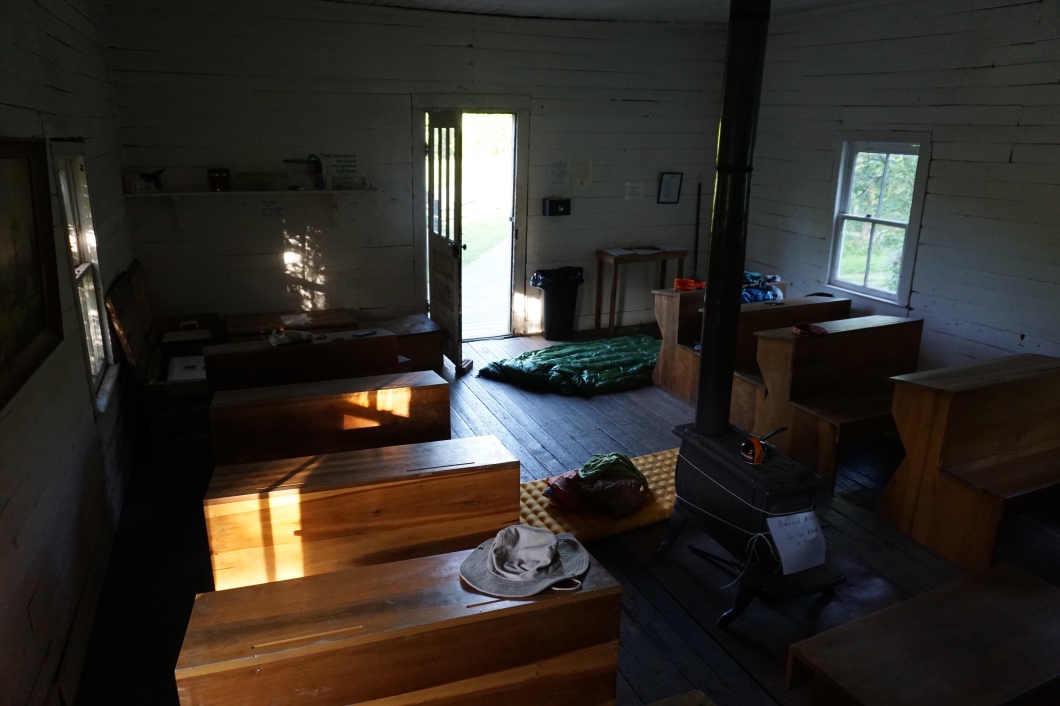 The 3 hikers left about 4 and so Disco and I started setting up our beds and cooking dinner. We took a walk down the road chatting. Disco got his name because he carried a frisbee with him when he started. He had just turned 20 and worked in landscaping for a year after high school in eastern Massachusetts. He started the trail with his friend in February. He recently parted with his friend so he could hike faster and Disco is fast. He hikes at least 3.5 miles per hour. We talked about our lives and why we are out on the trail and I could sense Disco was a sweet and smart guy. 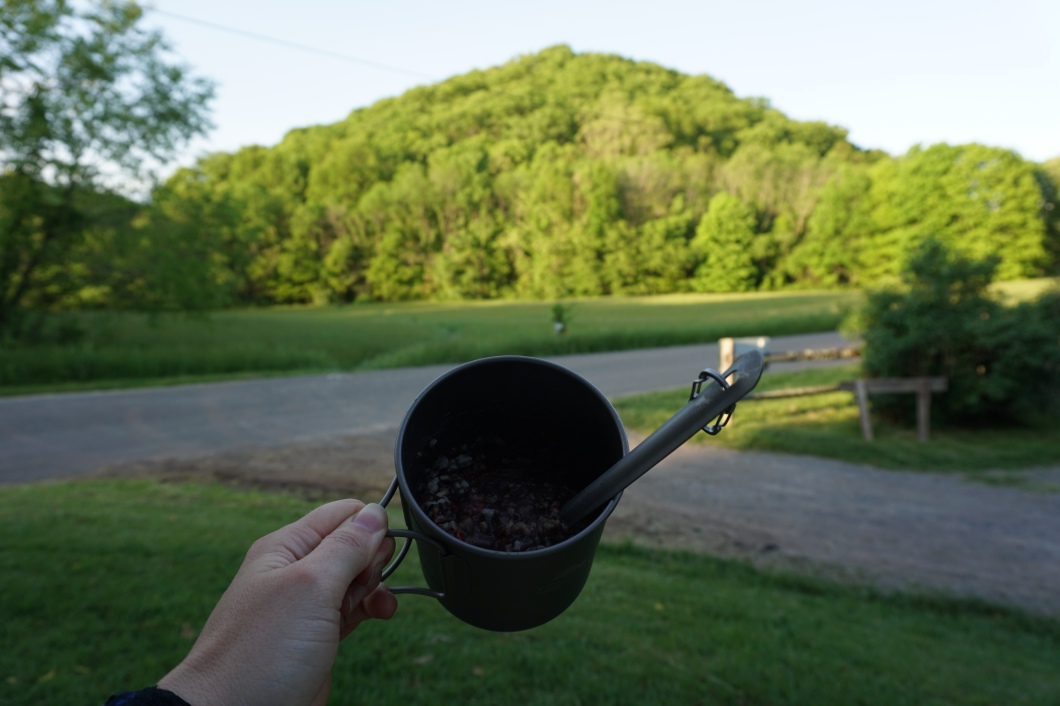 I ate my dinner on the porch as the sun was setting. It was a beautiful place to stay the night. Tomorrow I will do 13 miles over Big Walker Mountain with Disco to my next hostel in Ceres to resupply and dodge the rain.